Today the work of this prophet of unity, Father Paul of Graymoor, continues in the mission of the Franciscan Friars of the Atonement enfleshed in their charism received from their saintly Founder and achieved through the activities of ecumenical dialogue and reconciliation. They seek to establish a dialogue with Jews, Muslims, and other religious communities worldwide, to create a world of peace and justice. Today, by living the consecrated life, the Friars minister in the United States, Canada, England, Italy and Japan. 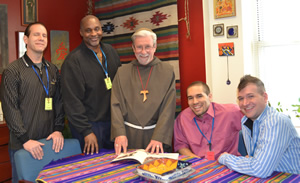 Father Paul welcomed the first poor wayfarers to Graymoor as his "Brothers Christopher." Today, St. Christopher's Inn continues to welcome thousands of people in difficulty, unemployed, in poverty, with sickness, having lost important relationships, and even the loss of the meaning of life, due to substance abuse and alienation. Perhaps the greatest gift that the Inn offers to these people, consists in welcoming and listening to them and understanding them. As Pope Francis has said more than once, the Church must go out of herself and go to the places in the existential margins of society. For over a century, the prophetic work of Father Paul of Graymoor continues to realize the Gospel mandate that Pope Francis today proposes as the charitable mission of the Church.

Founded by 1914 by a New York City doctor with the help and support of Father Paul, the Catholic Medical Mission Board continues to provide health care programs and services to people of all faiths in need around the world.

The missionary zeal of Father Paul overflowed into other activities. In response to the demands of the Eastern Churches in difficulty in Greece and in the Middle East, in 1924 he founded an association called "The Catholic Near East Welfare Association" (CNEWA), whose purpose is to help our eastern brothers and sisters to live their faith in the midst of difficult situations that threatened their very survival.