Week of Prayer for Christian Unity

From January 18-25 in 1908, the Sisters and Brothers of the Society of the Atonement observed the first Church Unity Octave. In the issue of The Lamp, he recommended the readers observe the octave similarly by public and private prayer services, Masses and services, sermons and instructions, conferences and dissemination of church unity literature. 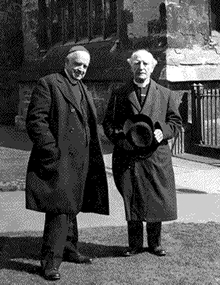 The Church Unity Octave was first observed in January, 1908. Celebrated in the chapel of the Atonement Franciscan Convent of the Protestant Episcopal Church, on a remote hillside fifty miles from New York City, this new prayer effort caught the imagination of others beyond the Franciscan Friars and Sisters of the Atonement to become an energetic movement that gradually blossomed into a worldwide observance involving many nations and millions of people.

Approximately one and one half years later, the Society of the Atonement was corporately received into the Catholic Church. On February 25, 1916, His Holiness Pope Benedict XV, by a Papal Brief, extended the Church Unity Octave to the Universal Church, at the time, enriching it with plenary and partial indulgences. Father Paul immediately took pen and paper in hand to write letters to Catholic Bishops around the world, asking them to observe the Church Unity Octave in their dioceses.

In 1964 with the promulgation of the Decree on Ecumenism of the Second Vatican Council, which expressed to Roman Catholics in clear and unambiguous terms: "In certain special circumstances, such as in prayer services for unity and during ecumenical gatherings, it is allowable, indeed desirable, that Catholics should join in prayer with their separated brethren. Such prayers in common are certainly a very effective means of petitioning for the grace of unity, and they are a genuine expression of the ties which even now bind Catholics to their separated brethren."

As a ministry of the Friars of the Atonement, Graymoor Ecumenical & Interreligious Institute promotes Christian unity and interreligious dialogue in North America. After the Second Vatican Council, when the Catholic Church made a full commitment to the modern ecumenical movement, the Friars of the Atonement established what was then called Graymoor Ecumenical Institute, first at Graymoor and later at its present location at the Interchurch Center, 475 Riverside Drive, New York, NY.

GEII fulfills its mission through study and research in the ecumenical and interreligious movements, and offers resources for others including expertise on ecumenical and interreligious matters, making staff available upon request for lectures and short courses, sharing information to inform and educate about ecumenism with news media and offering information to researchers. GEII publishes Ecumenical Trends, 11 times per year, an award winning journal promoting Christian unity and interfaith dialogue, in the tradition of Father Paul's publication he began in 1903, The Lamp.

In fulfilling their charism given to them by Father Paul of Graymoor, the Franciscan Friars of the Atonement include among their ecumenical ministries Centro Pro Unione. The Centro Pro Unione, founded and directed by the Franciscan Friars of the Atonement, is an ecumenical research and action center. Its purpose is to give space for dialogue, to be a place for study, research, and formation in ecumenism: theological, pastoral, social, and spiritual. The Centro was inaugurated in 1968 and is situated in the heart of Rome's Piazza Navona, in the historic and beautiful palazzo belonging to the Doria Pamphilj family. It consists of a library of three rooms, a meeting room, and a large hall for conferences on ecumenism. Its library has 400 periodicals, 22,500 volumes fully catalogued on-line with the ALE program and the information network URBE. The bibliography, updated daily, currently has more than 28,000 records of inter-church and inter-confessional theological dialogues, both national and international; studies of the World Council of Churches; major world and regional ecumenical assemblies; confessional liturgy and spirituality; international survey of ecumenical centers.

In 1991, Centro joined the association of URBE, a network of libraries of the major pontifical universities of Rome, and since 2003 the library is a member of ATLA (American Theological Library Association.)

Each summer the Centro Pro Unione offers a Summer Course in Ecumenism for three weeks entitled: Introduction to the Ecumenical and Interreligious Movements from a Roman Catholic Perspective.