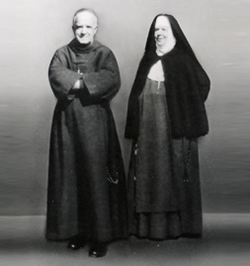 Both Fr. Paul of Graymoor and Mother Lurana lived by scripture and were guided by Holy Spirit their entire lives. When Father Paul of Graymoor died in 1940, the Rochester, NY Catholic Courier wrote: "He sought for the light and he found it through God's grace. He heard the call of divine vocation and he answered it."

His life was one of deep faith, persevering prayer and efficacious penance; in his every word and act he strove to elevate the supernatural life of the world. Father Paul was a strong man with a strong faith in God. His love for God and his fellow man were deep and true, but never maudlin. He labored his whole life to become like Jesus, a life of renunciation and suffering which he undertook with joy in order to share in The Atonement made by Christ for the sins of the world.

Father Paul was an indefatigable servant of God whose work was to spread the Kingdom of God on earth. He had the heart of a Franciscan and the missionary zeal of St. Paul, as evidenced by his many publications, sermons and letters he left behind, and the Ave Maria Hour Radio Show which brought the words of the gospel and the lives of the saints into people's homes.