During the course of the Church Unity Octave I propose to give you a brief conference at Mass each morning on the subject which is uppermost in our mind at this time, and that is, the unity of the Disciples of Christ in the communion of the holy Church which He founded.

Unity is one of the essential parts (attributes) of the Divine Being. God has been revealed to us not only as one, but also as three in one. There is the Father, the Son, and the Holy Ghost, three distinct Persons, and yet, such is their unity that They constitute one God. That is part of divine revelation. In the Old Testament the unity of God was revealed and the Jews worshiped Him as one God. It was only when the Son came into the world to show and reveal to us the Father that we have the manifestation of the threefold personality of the Godhead.

It was revealed at the Baptism of Christ on the bank of the Jordan by St. John the Baptist, for when He was baptized, the heavens opened, the Holy Ghost descended in the form of a dove, and the voice of God the Father speaking from Heaven proclaimed: "This is my beloved Son in whom I am well pleased. Hear ye Him." Thus we have the revelation of the Divine Trinity, and so it is set forth in the very Person of God. Plurality and yet oneness in that plurality, so perfect is the unity of God, perfect harmony of the will of the Father, the will of the Son, and the will of the Holy Ghost; such perfect correspondence in all their actions that they constitute absolute proof of one God, so that in the very Person of the Godhead is manifested forth to us this element of unity.

When our Lord Jesus Christ came into the world to make unto Himself a new people, those that should be regenerated and become members of His mystical body, He set forth the divine will that they should constitute in themselves a unity. On the night of His betrayal after He had instituted the Blessed Sacrament which is the sacrament of Unity, He addressed His Father in a wonderful prayer, and in this prayer He prayed particularly for the unity of those who believed in Him, and He used very strong language: "As Thou, Father, in Me and I in Thee, that they may be one in Us."

The unity that exists between God the Father and God the Son is a most intimate one, and yet our Lord desires that the same unity might be manifested and set forth in the members of His mystical body, in His elect, those whom He shall redeem or has redeemed, by His Precious Blood, and whom He shall present without spot or wrinkle, or any such thing, glorious before His Father in heaven. In them He desires that there should be manifested a unity akin to that which exists between Himself and His Father. Now this is a unity of love and also, unity of will. He was asking of the Father a tremendous thing, and owing to the infirmities of men and their imperfection by reason of their fallen nature, the prayer has only been answered in a very limited degree on the earth.

It will be perfectly answered in the final consummation of all things when all the members of His body have been perfected in sanctity and when they attain the Beatific Vision. There will prevail around the throne of God a unity among the faithful that will be the reflection of unity that exists before and in the Person of God Himself. Meantime, on the earth, knowing the will of God, we should strive to realize in ourselves that unity: unity of will by having no other will but the will of God the Father, even as Our Lord Jesus Christ came to do the will of Him that sent Him, and then unity of charity, the unity of love, being bound together in that wonderful intimacy which can only be brought about by love, the unity of charity, and while we strive by correspondence to grace to realize this unity among ourselves and in unity with God, we are at the same time beholden to take up the prayer which Christ Himself presented to the Father and pray it not only for ourselves, but for all the faithful, for all that have been regenerated and all that have been redeemed by the Precious Blood of Christ, that they may realize in themselves and in unity with God the answer to that prayer of Christ addressed to His Father, Ut omnes unum sint. 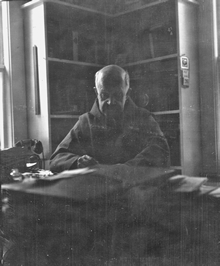 Father Paul Wattson
at his desk

The Union that Nothing Be Lost
Feast of St. Thomas
December 21, 1932

It was the feast of the Immaculate Conception, that we were reading the Divine Office in our Chapel and all of a sudden had the idea of the U.N.B.L. So it was very difficult to keep our mind on the recitation of the office and we went to bed with it that night and it was during the night watches that we composed the prayer of the Union-That-Nothing-Be-Lost, "Lord Jesus Christ who commanded, etc. . . .for the good of our neighbor, (the) salvation of souls and all for love of Thee." And then we sat down and wrote to Bishop Cusack to whom His Eminence, the Cardinal Archbishop, had given the oversight of our Society and sent him the Rule. We waited for some time and then he replied. He said, "I hesitate, dear Father, to bless this organization because it seems to me the Rule is so perfect you will not get anyone to live up to it. . . I do not see it a help to your Institute."

I felt rather downcast and the next morning I said Mass and held the Host in my hand. I addressed Our Lord Present there,

That day or the next there arrived on the Mountain a pilgrim who had been there twice before. He was a little man, 70 years of age who came from Waterbury. His clothes were shabby. His shirt was not entirely immaculate. Yet he carried about with him a certain amount of dignity that caused me to entertain him as our guest at the Friary rather than at the first original (St.) Christopher's Inn and it was usually his custom to come in the evening and depart the next morning but this time he stayed a couple of days. Finally the Senior Cleric came to me and said, "Father, Mr. Reid seems to have something he wants to communicate with you and he seems a little bit hurt because the...." as he called the Father Superior, "has not time to speak to him."

So immediately I called him up into the little cell that was not only my bed-room at that time but my office, and said, "Mr. Reid, you have something to talk to me about. What is it?" "I have been reading in The Lamp about a Mr. Potter who is a convert from the Church of England, and he has the Orphanage there. I have written him a letter and told him if he would select two of them for the Priesthood, send them to America to educate them, I will send the money over to England." I said,

"Well, you do not have to go to England to find somebody to educate for the Priesthood. What we need right here on the Mountain is a little house where we can start to educate our own young men for the Priesthood of the Society. We only have seven little cells in this Friary and we haven't any money."

"I will tell you what I will do. I will send you my check for $5,000.00 to put up that building so you can have your young men study for the Priesthood."

"I thought you were a poor man."

"Well, I only have a little farm of a few acres up on the outskirts of Waterbury but I have never wasted anything in my life. I work hard all day and go to bed at night and I have gradually accumulated that amount in the bank."

So, true to his word, he left $50.00 which was his admission fee into the Union-That-Nothing-Be-Lost. That is, Perpetual Membership fee. Then he wrote back and the letter was dated on the Feast of St. Thomas, just seven years from the time when I received the inspiration and it had a check for $5,200.00. When I looked at that check I thought of the five barley loaves and two small fishes. "Well," I said, "That is wonderful."

So I immediately wrote the Bishop and when the Bishop received that letter he replied in the next mail. "How can we hesitate any longer to give our blessing to the Union?" So God not only raised the Union but raised up the man who was the highest exponent. He spent the minimum on self and gave the maximum to God for the extension of His Kingdom and so under the Blessing of God the Union has expanded.

...Christ came into the world and united Himself with our humanity, going about ministering to humanity because He wished to save them, and in His mystical body He wishes us to do the same, for we are now His instruments. When He went up into Heaven, He said, "Go ye into all the world and make disciples of all nations," and they were to go and carry out all these ministrations to the sick and poor, the blind, the lepers. And whatever it was, they were to do it in His name and for Him, and by the medium of His spirit they would carry out this ministry of love and of service. And that should be our work, giving and spending ourselves, as Saint Paul says, "Though the more I love, the less I be loved." "But by the grace of God, I am what I am; and His grace in me hath not been void, but I have labored more abundantly than all they; yet not I, but the grace of God with me," until my labor and activity transcends all my brethren, those Apostles on fire with the fire of divine love, traveling and carrying themselves to the very limits of the world for the Gospel, even though the penalty be at length a martyr's crown. There is a motto which we should take and fulfill in our life, "Do all the good we can, in all the ways we can, to whomsoever we can," as long as God gives us the spirit and joy of service.